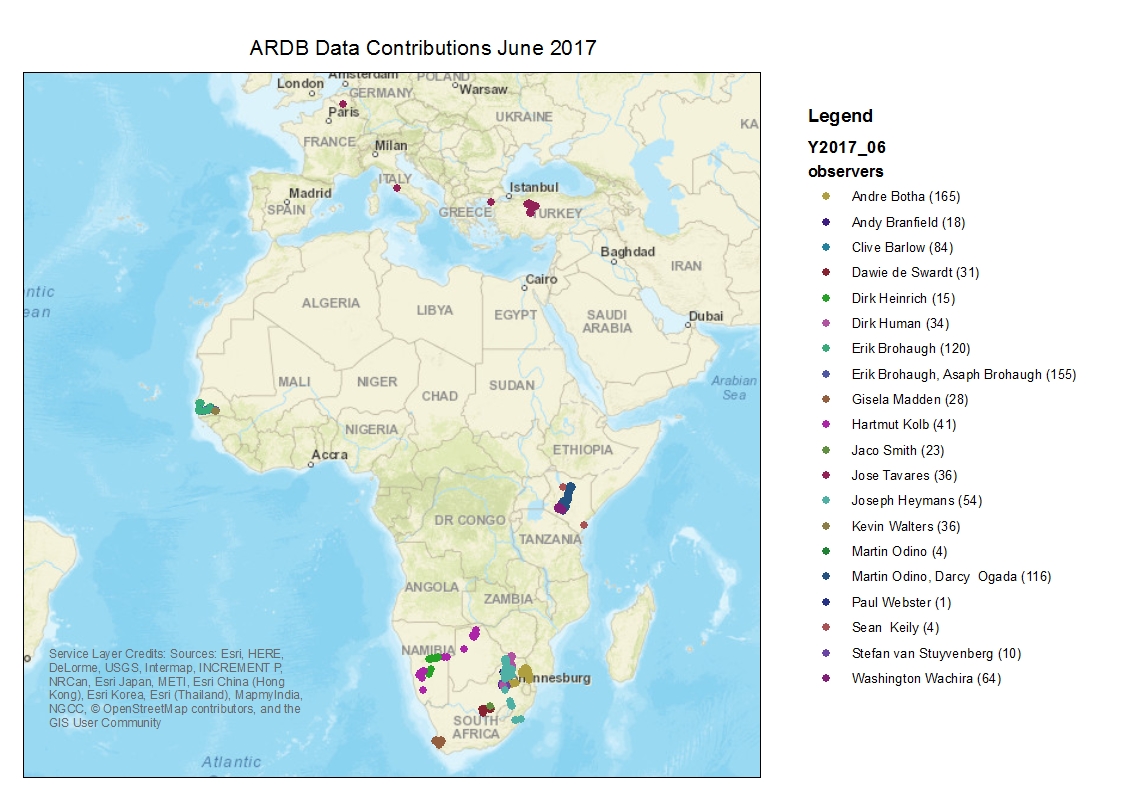 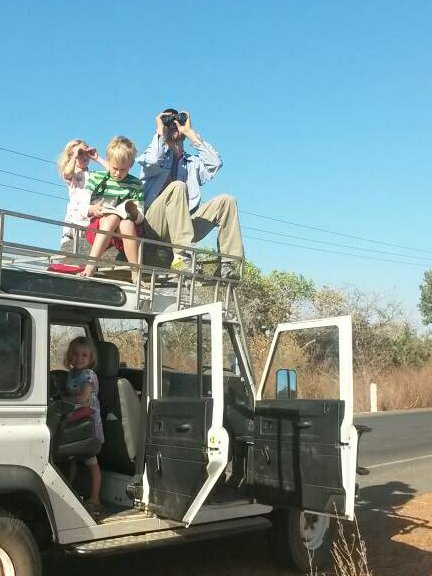 Records this month showed a steady flow from our regular contributors in Senegambia, Europe, Kenya, South Africa, Namibia and Botswana. Erik and Asaph Brohaugh made a significant contribution with 175 records from The Gambia.  Last month we featured Clive Barlow as a contributor to ARDB and behind the scenes, Clive has played a major role as coordinator for the ARDB in Sennegambia by bringing in new data and by recruiting new observers like Erik.  Erik is a Minnesotan (from the northern part of the US) who has been working in The Gambia as a volunteer for the past 12 years.  In his words, “My focus areas are mainly environmental – trees, agriculture, erosion control, and low impact building methods. For years I have been doing informal HV counts for my friend Clive Barlow, but it’s only in the past year that I’ve really gotten hooked on raptors, especially vultures. This is due to both Clive and my nine year old son, Asaph, who is a more competent birder than myself! It has also helped that he and I happened on some large populations of Gyps at the beginning of this year. Through observing roosting vulture populations, I’ve also become even more aware how desperate the tree situation is here and am all the more committed to working towards positive change in that area.

This week we are delighted to host Munir Virani and his family Zahra, Kaisaan and Zayan visiting us from Kenya. Blessed with good weather, Rob has been showing them the sights of Pembrokeshire including some puffins on Skomer. 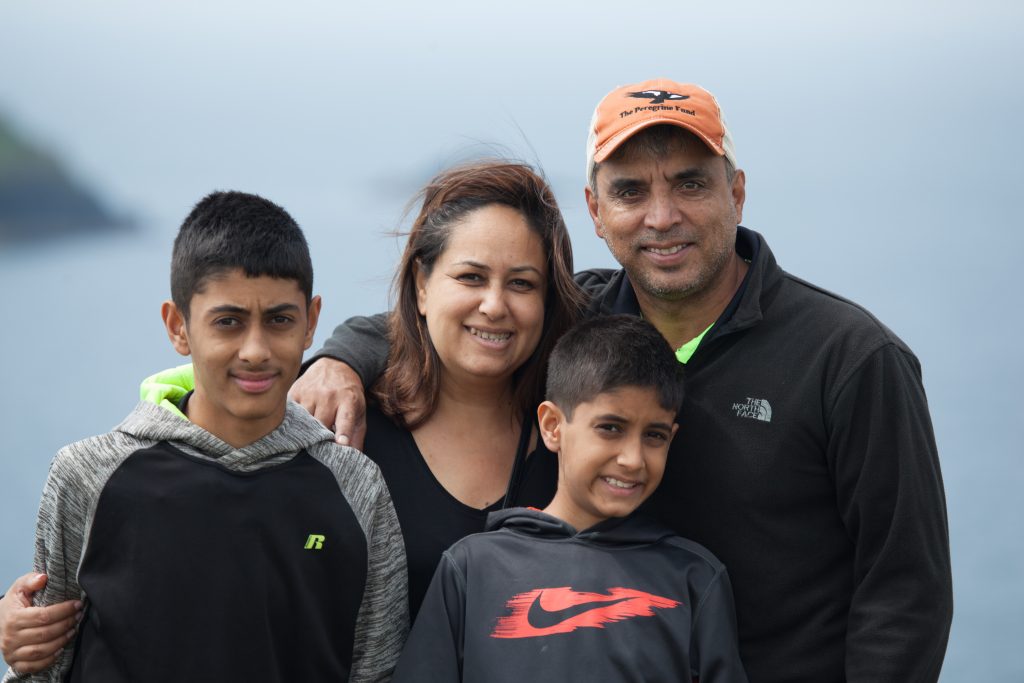 From Munir: “It has been a tremendous trip to see the central hub of Habitat Info in the heart of Wales. Rob is an amazing host and we were very well looked after. I am really glad to see how the ARDB has evolved from a central idea six years ago. From the launch in 2012 in Arusha, the ARDB has certainly come a long way and beyond everyone’s expectations. One of the highlights of this trip has been putting together a strategy with Habitat Info for ARDB to go global. This is an ambitious project and vision but we have to think big and having a Global Raptor Data Bank will help raptor biologists worldwide to identify areas of high raptor conservation value and add to conservation efforts in those areas. Also, it has been fantastic to see the ARDB database from Kenya’s contribution grow from strength to strength with inputs from Martin Odino and Washington Wachira. With an alliance of raptor people across Africa, we are confident that we can continue to invest in tomorrow’s raptor biologists from African countries to champion raptor conservation over the coming decades as Africa’s landscape changes”

We have had some great contributions from Kenya this month: 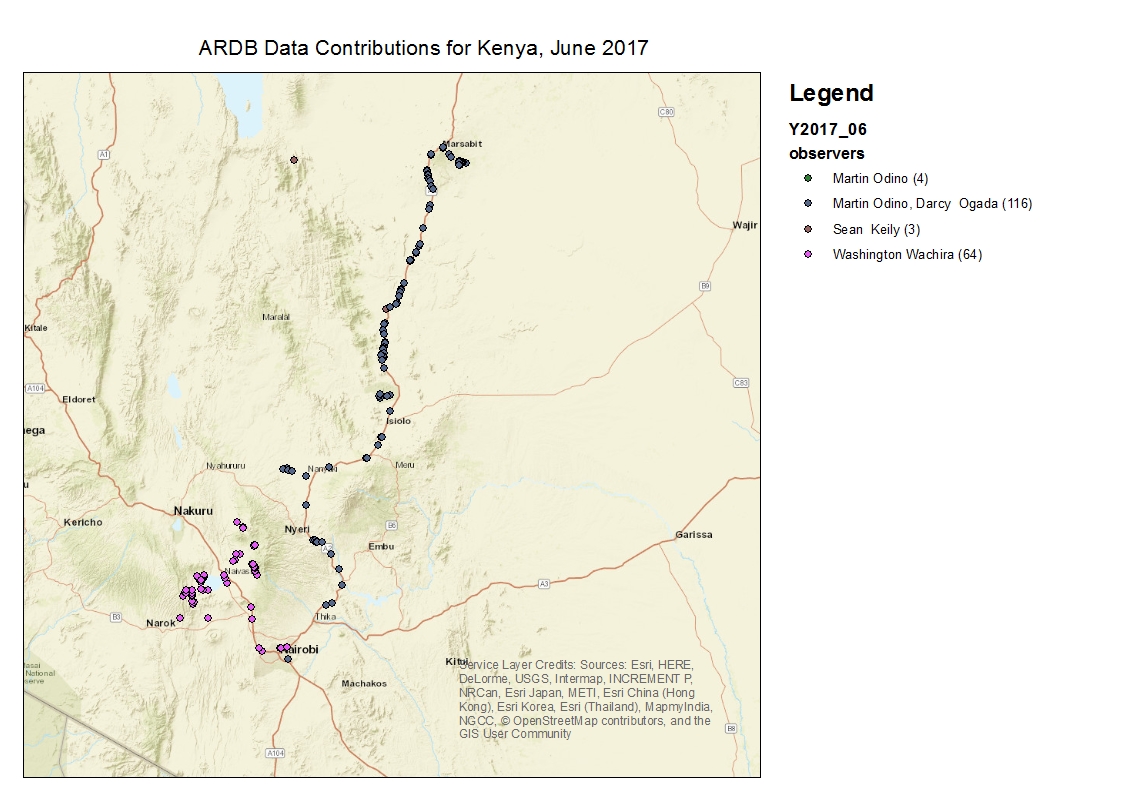 a beautiful Ayre’s Hawk Eagle as reported this month by Washington Washira near Naivasha in Kenya (photo: Jean-Marc Rabby) 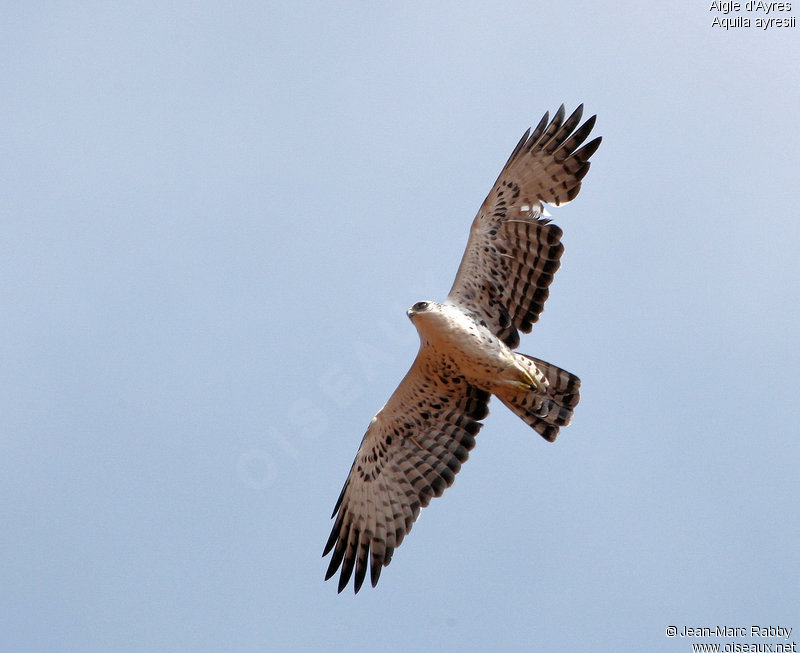