A private individual contacted habitat INFO concerning a planned single wind turbine installation in the Trelessy area of South Pembrokeshire. The individual was concerned about the visual impact of the turbine on both the wider surrounding area and immediate vicinity. The effect on local wildlife was also a major concern. The proposed site was well within the Pembrokeshire Coast National Park, within two Kilometres of the Carmarthen Bay Special Protected Area (SPA) and on the migratory flight path of many important species of birds.

The Pembrokeshire Coast National Park attracts many thousands of visitors to the area every year and is an important element to the local tourist industry which is a key part of the local economy. The Carmarthen Bay SPA is one of only three entirely marine SPAs in the UK and therefore, its importance is significant. Although being entirely marine based the surrounding coastline still provides important habitats for the birds protected by the SPA and the concern was that placing a turbine in an area exhibiting strong winds would prevent birds from the SPA and also those migrating through the area from flying there.

Therefore, habitat INFO constructed a map that displayed the proximity of the SPA and also the expected visual impact of the turbine. This identified two key points; that the proposed site was very close to the nearby SPA and that the turbine would be visible from many of the main roads into the National Park and also the beginning of the Pembrokeshire Coastal Path. habitat INFO used the 3D Analyst extension of ESRI’s ArcGIS package to perform the visual impact assessment and provided both map graphics and 3D scenes (Using ArcScene). As of September 2012 the plans to construct the turbine have been dropped. 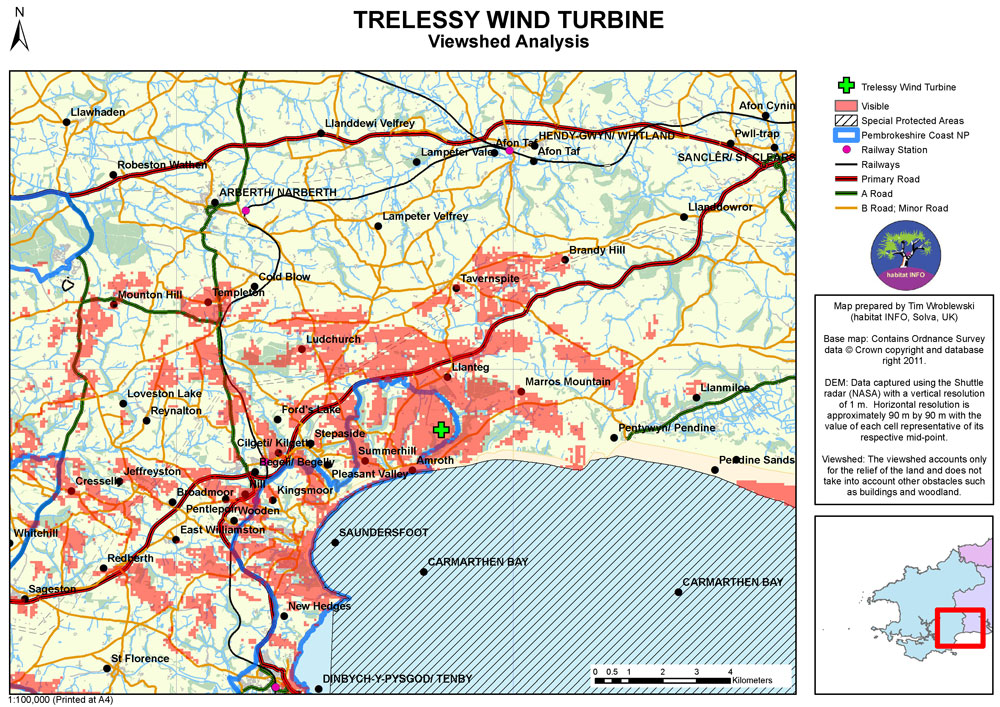